As worried as I’ve been about the whole process of studying abroad… I can’t look back now. I took my passport photos (and got 10 extra copies, damn you Sweet Briar) today, and applied for my EXPEDITED Passport. I’ve been having trouble with Campus France and the PASTEL system, and since I’ve been warned that my process for obtaining a student visa is notoriously… ridicule, I’m trying to get that done ASAP.

I’m sure some of you are reading this thinking, “You’re worried? Quelle sotte.” I have my reasons. Language? Nope. Taken care of. I’ve been studying French for six years, and it’s one of my majors in college (the other being Theatre). Considering this is the biggest fear most people seem to have when studying abroad, everything else must seem irrelevant… but it’s not. Why am I worried? I’ve got a medical track record that probably weighs more than I do. I get sick a lot, and I’m scared that I’m going to end up in the hospital, and the main people I would want at my side won’t be there. That record includes various allergies, including food allergies. Gluten. Wheat. THE BASIS OF HALF OF WHAT THIS COUNTRY IS KNOWN FOR. I know how to communicate my issues, and how to get around them, but I cannot shake the idea of how terrifying breakfast is for me. 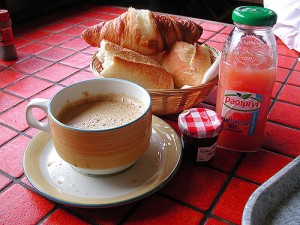 
There’s my problem. I keel over if I don’t eat something in the morning before I leave. I’ve also been told I should eat something with protein, not just a gluten-free bagel. More likely than not, I’ll be living with a family, and I really do NOT want to force some poor French woman to learn how to cook for me… I’m sure my “issues” will be brought to light immediately when any family is interested in housing me, but still…