Since Sheila and I were “out” so late last night, I slept until my alarm went off at ten. Kind of. I definitely didn’t complain of it being cold last night. I actually got up in the middle of the night to close the window and put socks on! Our bateau-mouche ride wasn’t going to be until three today, so we almost went back to bed. I decided to stay up and play around on the computer, and Kyle shot me a Facebook message that said he and Rouge would be headed over to our place soon, so I needed to get the other two girls up so we could all go to Carrefour and get lunch. Crap. I woke up Joan and got Sheila back out of bed, and hopped in the shower, then got dressed. Sheila and Joan ate breakfast, but someone had to be ready to let Kyle and Rouge in! Once they got here, we all hung out as Joan and Sheila finished getting ready. We decided to head over to the area of Paris where Sweet Briar is to get brunch since Joan wanted to check her class schedule, there’d be cheap places to eat, it’d be closer to the place we were all meeting for the bateau-mouche rides, and Rouge wanted to do some lingerie shopping.

When we made it over to the Rennes metro stop, we passed by a kebab restaurant that looked promising. Sheila, Joan, Kyle, and Rouge were able to get something for just over five euros, but since I have to avoid the sandwich bun… guess who gets to pay nine euros for lunch… and can only manage to eat half of it… Assiettes (plates) come with MORE fries than a usual kebab sandwich, and they come with a salad too. Good lord… I always feel so bad for wasting so much food, but it’s what I have to do because I can’t eat the bread. After lunch, we forced Kyle to buy a phone from SFR so that we can get a hold of him when he’s not on Facebook (goober thought he could make it all this time without one), then we headed to Sweet Briar so Joan could double check her schedule, and we headed to where the bateau-mouche ride would be. We ended up getting there about… oh, 45 minutes early. We waited all that time, then took the ride. It was FREEZING. All of the pictures I took (that weren’t too over-crowded with other picture-taking tourists) are on my Flickr page. Here are a few of my favorites. 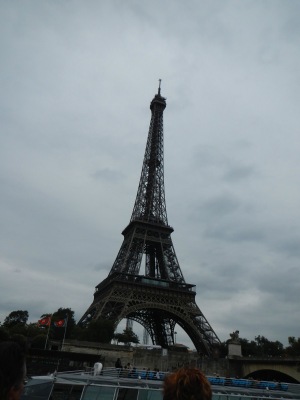 After the ride was over, we headed back over to the Sweet Briar area of Paris so Rouge and I could check out a few lingerie shops. I firmly believe that I’m the most awkward person to shop for lingerie with. I never buy the stuff. I have enough problems trying on normal clothes. So I’m walking around the store making all kinds of faces that say things like “where’s the support to that?” or “that leaves nothing to the imagination” or “you expect me to pay WHAT for how much fabric?” Sometimes I even say these things out loud. Eventually, I found something I kind of liked, tried it on, liked how it looked, and bought it. Rouge bought some ungodly soft pajama shorts. We left, checked out another lingerie store for the heck of it, and walked a little further up the street. I saw a post office, and remembered that I had some post cards that I wanted to send, so I split from the group for a minute to go up to the drop box. I was alone for all of two minutes, and a beggar started bothering me. The beggars on the street have no shame, and no sense of personal space. A large black man started yelling “Madame, madame” at me, which is a first, because I’ve always been called “Mademoiselle” up to this point (of course, this was in establishments). I ignored him, and looked up at the passenger crossing light, willing it to hurry up and change. My friends were on the other side of it. This guy was not thrilled that I was ignoring him, so he came up next to me and keep yelling at me. I wouldn’t look at him. So now he’s upset, and he starts poking me! “Madame, madame, madame, madame…” Good lord. So I shoot him a dirty look. “Avez-vous un ticket?” He wanted a ticket to something. I’ve seen signs in restaurants for something called Cheque Déjuner, and I’m not sure if that’s like a lunch voucher, or if all he wanted was a ticket to use the metro, or money, but regardless, I was not about to pull out my wallet and give him anything. I grumbled “Je n’ai rien” (I don’t have anything/I have nothing) at him, brushed him off of me, and rushed onto the street since the light finally changed. From here, we all got back on the metro, and departed as needed to make our transfers to get home.

While we were all relaxing and getting ready to meet up again to go out tonight, Madame was making dinner, and it smelled so delicious. We knew it involved some amount of garlic, because that’s what was wafting down to our rooms. When she called us to the table, we found pasta (gluten-free for me), two kinds of ham (cured and uncured), and broiled tomatoes with olive oil and garlic. So simple, but still so delicious! Sheila had mentioned how much she loved the fourth kind of cheese we’d had at our wine tasting (the Ossau-iraty cheese with black cherry jam) a couple dinners ago, and Madame said she’d buy it. We thought she was joking, but she had it for us tonight. It wasn’t quite the same cheese as we’d had at the tasting (knock-off cheese exists in France), nor was it black cherry jam (just cherry jam), but it was still wonderful.

After dinner, we all got ready, met up with Rouge and Kyle, then headed off to the Latin Quarter to meet up with Sandra. We went down to the Seine, pulled out three bottles of wine that we shared (one bottle between two people, this is where we used the Beaujolais we’d bought last night) playing two drinking games at once. We played Never Have I Ever (meaning someone says “Never Have I Ever” and adds something they’ve never done at the end, I could say “been to Africa,” for example, then if someone else has done it, they put one of their ten fingers down, and drink), and Buffalo (if someone is caught drinking from the wine bottle with their strong hand, they have to drink again). I shared a bottle with Sandra, and we were only able to finish about half of our bottle by the time the game was done. Kyle and Rouge had finished theirs, and Joan and Sheila finished theirs off right after the game, so we kept passing our bottle around after we left the river to go find somewhere to potentially buy more drinks and dance (I knew I didn’t want to drink any more, however).

After some wandering, we found a pub that had some music playing in the back near the bar. The bouncer said that it didn’t cost us anything to get in, but it sounded like we needed copies of our passports to get in, so we all pulled them out. I stuck mine in my back pocket. Turns out we only need them if we were going to buy any drinks. I ended up losing the copy by the end of the night from all the dancing, which isn’t that big of a deal. It was a folded up piece of paper, so it would have been thrown out, and I have other copies. Once we got back to the part of the pub where everyone was dancing, I noticed there was a spot next to me where there would normally be seating, and someone had set their purse down, so I figured I’d do the same, and take off my blazer since it was warm. For the most part, our group was dancing in a line, and I was at the end of it. I could tell that a creepy guy sitting at the bar was staring at me and checking me out, so I tried to turn away and ignore him, but then he grabbed my wrist and tried to pull me toward him, so I blocked him and pulled his hand off of me. A few minutes later, he did it again, and came up to me. What is this, pick on Claire day?!

“Laissez-moi tranquille, s’il vous plaît.”
(Leave me alone, please.)
“Vous êtes jolie, un verre?”
(You’re pretty, drink?)
“Non! J’en veux pas!”
(No! I don’t want one!)
“Permettez-moi de vous ramener chez moi.“
(Come home with me.)
“Non. Laissez-moi tranquille! Je suis ici avec des amis. Va t’en!”
(No. Leave me alone! I’m here with friends. Go away!)
Sheila was up on the raised seating area, and figured out what was going on as I kept trying to bat this guy away from me, so she grabbed my hand and pulled me away. I kept my eyes out, and I was pretty sure the guy left after I moved, so that was a relief. The pub played American music pretty much the entire time we were there, so that was really fun, we all knew the words to just about every song, and it wasn’t just hip hop, they even played some classic rock! We stayed up on the raised area the entire time we were there, almost like it was a stage, and a lot of people were just staring at us like we were a show since we seemed to be the only entertaining people in the dancing area. Sheila and Joan tried to go down to the lower level to get a couple cute guys at the bar that were staring at us to dance with them, but they were too shy. We figured the metro would close at two, so we left at 1:15 to make sure we’d get home by two, and we did. Sheila was leaning up against one of Kyle’s shoulders while we were waiting for one of the metro trains to arrive, and I was tired, so I leaned up against his other shoulder. Sheila asked what I was doing, since she’d evidently “claimed” Kyle, and he was her “dawg.” “I’m just borrowing him.” Sheila was still pretty pompette, so she quoted a meme. “One does not simply borrow someone else’s dawg.” That was probably the quote of the night. This was the first time I’d ever been out “clubbing,” and it was a lot of fun. I’d love to do it again some time. Sans the creepy guy that wanted to take me home, of course…
Faites-vous des amis prompts à vous censurer. -Boileu