Joan was already up when I went out to the kitchen in my pajamas to turn on the oven and set the table for breakfast this morning. She’d been up all night with a headache, and decided to have breakfast early. I popped my croissant in the oven and woke up Sheila. We chatted over breakfast, and I was so hungry, I couldn’t wait 10 minutes for my croissant to cook, so I improvised a little. I popped a rice cake in the microwaved with a slice of cheese on it and ate that while my croissant was cooking. The croissant itself was easy enough to cook, and it tasted pretty good when I cut it open and spread some jam on the inside. Sheila and I managed to figure something out about my schedule with Paris III… Sheila’s been talking about “creepy Paris VII” that she has to take one class at, and when I mentioned I have one theatre class at a different Paris III building, she gave me a funny look. “Is it on rue Paradis?” “Yeah, why?” “There’s a building right next to creepy Paris VII that says ‘Sorbonne Nouvelle Théâtre’ on it… I was wondering if you’d end up having to go there…” CRAP. I HAVE TO GO TO CREEPY PARIS III. Joan headed off to class after taking something for her headache, so Sheila and I got ready to leave for our own classes, then we headed off to Sweet Briar.

I saw the beggar with the dog as we were getting on the metro, he was getting off… Sheila had her class at 1:30, and we saw Joan. She was hungry and hadn’t had lunch yet, so I headed out with her to go find something. We stopped by a nearby cafe that we thought wasn’t expensive… Lies. Going off of Joan’s new “fascination” with duck, we both ended up ordering a paramentier with duck. Yes, I asked if it was cooked with wheat, and the waitress said it wasn’t. Basically, for 16 euro a piece, we got a decent sized bowl of mashed potatoes (that had been placed under a broiler) that had deliciously marinated, moist, shredded duck underneath it, and a side salad. Definitely delicious, but I wouldn’t say it was worth 16 euro… then again, I’ve paid nine for food at a kebab place. I’d say this would have been fairly priced at 12 euro. Joan and I decided we’re not eating out for the rest of the week. I probably needed this kind of a meal to help gain a little weight back, however… 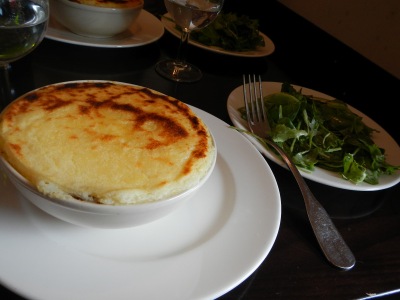 Headed back to Sweet Briar for my class at three. I had a little bit of time to kill before the class was going to start, so I picked up my official student card for Paris III. I can load money onto it and use it to buy food at the student cafés… hopefully that’s cheaper than the 16 euro lunch I just had… Mme. Mellado is wonderful! She’s really funny, and I think I’m going to learn a lot in class. It IS a grammar class, but not a traditional one. There are three parts to it: Grammar itself (only a small bit), learning new vocabulary (specifically idiomatic expressions), and eliminating anglicisms. The whole class is tailored to our individual needs. We’ll do little compositions for homework, turn them in, Madame will grade them, note our mistakes, and correct them in class. When we get our homework back, there are two colors of pen we’ll need to interpret. If she’s made notes in GREEN pen, that means we’ve made a mistake that we “have a right to make,” like it’s an anglicism, an improperly interpreted idiom, or something like that. Madame says that green is the color of hope, meaning that she hopes we won’t make those mistakes again. However… we need to worry about her RED pen. That gets used when we’ve made mistakes that we DON’T have the right to make, meaning it’s really basic grammar (way below our level of fluency, like a present tense conjugation error, or a masculine/feminine adjective mix up), or it’s a mistake that we’ve already gone over in class. We did a couple exercises in class to demonstrate how the system worked… Rouge had talked to me about it already. Madame asked us to translate this sentence into French: “As a student, I think that Paris is expensive.” Once we’d translated it, she called on each one of us and asked what we’d written. She never said if anyone was right or wrong right away, but told us when we were finished responding. I… kind of cheated. Fabian (professor in Tours) had given us a cheat sheet with expressions used in debates when we had some in class. I remembered seeing en tant que on the sheet under “opinion.” Rouge used that exact sentence when she was telling me about her session with Madame yesterday… and she’d given me the answer… so I used it.

“En tant qu’étudiante, je pense que Paris est très cher.”
Madame went on to say that usually, the first part of the sentence is what messes students up… but there was a star shining brightly in the grey sky of Paris, and it was me. Thankfully, she didn’t ask how I knew the answer… The usual mistake students make would be to use “Comme un(e) étudiant(e)” and that doesn’t work. To help us commit that expression to memory, Madame gave us other phrases to translate off of the top of our heads as she called on us randomly, things like “As a woman, I think that law is totally unfair.”
I didn’t see any of my usual friend group hanging around Sweet Briar, so I headed straight home. Joan was home when I arrived, and told me she was going to take a nap. Her headache had come back, and now her throat was sore like she had a cold. Bad news… Madame came home, and I told her what was going on with Joan. She was going to visit her daughter tonight, so she made dinner early, set it out, and called me out of my room (since Joan was napping and Sheila was talking to her mom) to show me everything. She’d even found some “OTC” French medication that’s great for headaches for Joan, and told me how much to tell her to take when she goes to bed. Dinner involved some smoked salmon, salad with balsamic vinaigrette, and something that looked like a French version of black beans. The salmon wasn’t my favorite. I definitely prefer it wrapped up with cream cheese in a Philadelphia roll. Man, I miss sushi…
I believe the plan for tomorrow involves visiting the Louvre (more in depth than we did last time), and checking out the Helmut Newcake bakery in the 10th arrondissement. It’s the first (and only) gluten-free bakery/cafe/salon du thé in Paris! The 10th arrondissement is also where creepy Paris VII/Paris III is located, so we plan on walking Sheila to her afternoon class there part to allow me to see the building and its location for my classes, and to not force Sheila to go alone. Some creepy guy not only told her to go home with him while she was walking out of the metro station, he grabbed her shoulder! I’m going to teach her some basic self defense moves… It’ll probably be good to brush up my own as well.
L’amour fait les plus grandes douceurs et les plus sensibles infortunes de la vie. -De Scudery