Sheila had one hell of a story to tell me when we got up for a late breakfast this morning. She never ended up finding Laney last night, and she had to take the nocturnal bus home, which involved getting directions from a French man, pronunciation lessons from a belle de nuit (hooker), the bus driver refusing to stop at the stop she wanted, which resulted in her getting off of the bus about a mile and a half past her usual stop, and getting home at 3:30 in the morning. That was the gist of the story. After watching Grey’s Anatomy, we got ready for our day, and headed over to Sweet Briar to meet up with Charlotte, who had just had lunch with Joan. We had planned on going over to the Bastille/St. Paul area to check out Le Marais since that was on our “Madame Said” to-do list, and it would be fun to have Charlotte come with us. We figured we could find a cafe to sit down at and grab a bite to eat as well. Charlotte probably wouldn’t need any food, but we hadn’t had lunch yet. We ran into Emily and a visiting friend of hers who had just come from Le Marais and we asked her where we should go. She mentioned L’As du Fallafel (34 rue de Rosiers, 75004) near the St. Paul metro stop (ligne 1). She drew a really interesting map in my notebook, so over we went… We did find it, but there was no room to sit down, and it didn’t look like there was anything I could get, partly since most things were sandwiches, and everything had to be for take out. We said we’d come back another time, and walked out of the area. This part of Paris has a big Jewish influence, and there are a lot of Jewish museums in the area, so that was really interesting…

We walked back onto the main road that the St. Paul metro stop is on, and decided we’d walk until we found a cafe with things that all of us could order that wasn’t very expensive. We found a winner! Le Rivolux Café (16 rue de Rivoli, 75004) had lots of food at really reasonable prices. Charlotte had French onion soup (a pretty decent meal-sized bowl) for only seven euros. My ham and cheese omelet was 8, Sheila’s omelet complet (ham, cheese and potato) was 8,50. Our omelets came with salad as well. I though about having hot chocolate too, but I stuck with just water. The food was delicious, and like I said, everything on the menu was really well priced. You could get crêpes (sweet and savory) for really good prices. Their breakfast option (I forget exactly what it was, but I believe it was a pastry, juice, coffee, and something else) that Charlotte had somewhere else that morning was four euros cheaper than what she’d paid. Kyle had a meeting with a group for class earlier that day, and had finished while we were at the café, so he met up with us when we were finished. Charlotte noticed an interesting store across the street from the café that she wanted to check out, so we went inside… It was ConfoDéco, a home store that sells things for the bedroom, kitchen, and bath, kind of like a Bed Bath and Beyond back home. They had cookbooks, so I was looking at them with Charlotte, and she made a remark that she wouldn’t want to buy one (as good as the recipes looked) because she wouldn’t be able to work out the measurements when she got back to America. That’s when I remembered the French cookbook I’d bought at the braderie back in Tours, and how I needed to buy a metric measuring cup before I went home… good thing I was in a store with kitchen supplies! I picked up a really cute plastic measuring cup that has markings for liquids, sugar, and even estimated weights of flour and rice. It was only 2,50, so it was well worth it. After we were done in the store, we walked around the area for a bit longer, then ended up walking all the way down to Bastille, which was good for Charlotte since she’d never been. Charlotte and I were both wearing the black boots that she’d bought yesterday, so we took a “boot twins” picture by the Bastille statue.

We kept walking down the road, and ended up making it to an entirely different metro stop on an entirely different line, so we figured it would be time for us to decide on a new place to go. With all of our laughing and being silly, we “stared” at the map for about 20 minutes trying to figure out where we wanted to go, then we ultimately decided on the Luxembourg Gardens, and the quickest way to get there would be to take RER B, which isn’t the metro, but a train, technically. This meant that we had to cross the Seine from where we were, and walk to Notre Dame, which is where the RER station was. It took us about half an hour to get there, and then we had to wander all over the Notre Dame area trying to find an entrance to the station. By the time we actually made it to the gardens… we found out that they were closed… Charlotte actually took a picture of the hours that the gardens were open. We ended up heading home to have our dinners apart, and made plans to meet up after dinner.

I wasn’t feeling very well by the time Sheila and I got home, so I rested a bit before dinner. I was assuming that my blood sugar was starting to bottom out, and that’s why I was feeling so lousy. We had some salmon with spinach and potatoes that was with a cream sauce that Madame had us pull out of the freezer. Sheila met up with Laney and brought her to the house so we could meet up with Kyle together, then we all met up at Champs-Élysées and walked the length of it (okay, about half in reality) at night. Joan wanted to find a club, which was a bit of a bummer since I certainly wasn’t dressed for it (nor was I feeling up for it). There were a couple that were on the street, but the rest of us didn’t really want to go with her. We made it to L’Arc de Triomphe and took pictures of it. It’s really pretty at night. 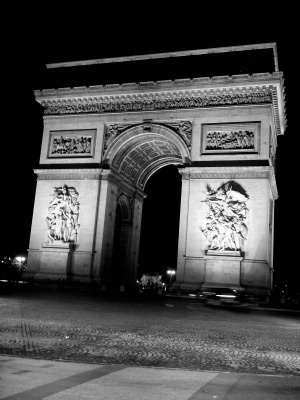 Joan was still absolutely set on going to a night club, and it was starting to rain. We suggested going to back to Bull’s Brothers, the pub back in the Latin Quarter that we hung out at a while back that didn’t cost us anything to get in. I wasn’t feeling at all up to it, and Kyle didn’t want to go since it was raining. Charlotte decided she didn’t want to go since she wanted to actually get a cocktail and not actually dance as much as Sheila, Joan and Laney seemed to want to. The three of us parted off from the group and headed home. I made it home by about 11:30, and I felt awful, but I had no idea why. I went straight to bed. I need to be well rested (and certainly feeling better) so I can get my tattoo tomorrow.